skip to main | skip to sidebar

It's a lonely life...that of the necromancer, er freelancer

A few days ago I posted a political cartoon on FaceBook. I really liked the style and content of it. My friend Lola, a fellow blogger said " i love YOUR illustrations. back to your blog sir!" I was rightly chastised, as I have been very lazy about posting on my own blog the last couple of months and I told Lola I would draw something just for her and post it. She replied " after careful consideration, I decided that i would be most excited to see something that involves both a dinosaur and a unicorn". So here is what I have come up with, not one, but three ideas involving a unicorn and a dinosaur. 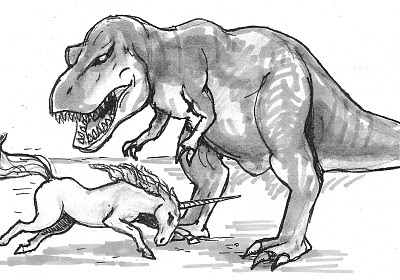 The first one is the most straightforward. It's an encounter between a unicorn and a T-rex. At first I had considered a raptor, as they are more in scale with a unicorn, but i liked the contrast in size, and the idea that a unicorn would actually take on
something 10 times its size. 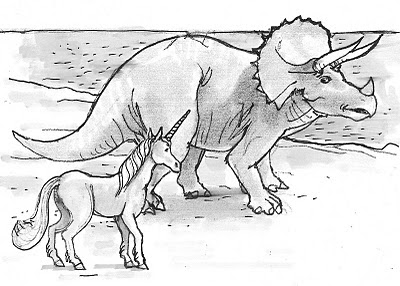 The second one came to me as I started thinking about similarities between a dinosaur and a unicorn. Although the triceratops has 3 horns instead of one, I thought that of all the dinosaurs, it was the most similar to a unicorn. It's an imagined meeting of a fanciful and a kind of "real" unicorn.

The last one was a bit of humor. I know some people who are "young-earth creationists" and who believe that humans and dinosaurs existed together and that Noah's flood is what really wiped out the dinosaurs and "confused" the fossil record. So why not include a unicorn in that scenario, it seems appropriate somehow.

What do you think? Which one do you like? If this works out it may become a regular feature of the blog. Requests anyone?
Posted by gcourage at 8:55 AM

gcourage
Salem, Massachusetts, United States
I am a designer and illustrator who is always looking for freelance work. I have run my own company since '08. I work primarily in print for non-profit and arts organizations, cultural institutions including museums, art associations, theater and ministry groups, and small businesses.